pocker: A docker container to integrate R and Python in CI/CD frameworks 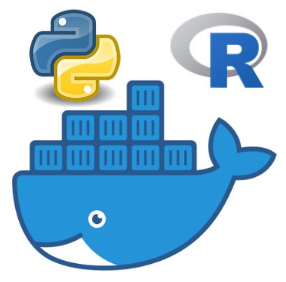 I started to use continuous integration with gitlab a few weeks ago and up to a few days was really happy with rocker image (basically docker + R).

I became ambitious and started to write a markdown that was comparing R and Python speed on simple operations. It was working fine on my laptop (anaconda is installed). However, because anaconda is not available in rocker image, markdown compilation naturally failed. I thus started the project to create a docker image that would do the job, i.e. that would integrate Python and R together. The container I propose is not well-suited for Python only repository, its goal is to ease the pass-through between Python and R

Since I am a beginner in docker ecosystem, it has not been an easy path. When I was thinking the solution would be trivial to implement I was planning to make the repository private. However, I think now that the solution produced can help people. I decided to make it public. To make the project as reproducible as possible, I ended up with that complex workflow:

This is not the most natural workflow. If you go into project history, you might see that I did not adopt initially that workflow. I adopted it after merging branches from two separated project that were pursuing the same goal. This complex set up presents an advantage for reproducibility: each time project updates are pushed, the code used to build pocker image and the example of use from continuous integration is updated.

I should warn people used to create docker image that I might not have created the most parsimonious image necessary to run R and Python together. I would welcome pull request to improve pocker repository

DockerFile is used to build the image. The main steps are the following:

In gitlabCI directory, you will find scripts useful for continuous integration related to docker project:

The other scripts build.R, scripts/* are here to propose tests for the configuration obtained from gitlab CI/CD.

I am data scientist in the Department of Economic Studies at the French national statistical institute, Insee. I study Big Data and computational methods related to microeconometric and data science fields.